Within the Mediterranean interconnectivity paradigm there is only a limited interest in terrestrial connections and land-based communication systems. This is directly related to a more general underestimation of the importance of overland communications in the ancient Mediterranean, which resulted in an archaeological neglect of the subject. The aim of this subproject is to fill the resulting lacuna by making a detailed study of landroutes and economic, religious, defensive, and socio-political overland communication systems in southern Euboia. Empirically-known, ancient roads stand at the basis of this research, which differs from many other studies that focus more on concepts of connectivity within network theory, but ignore the actual routes of interaction. The dataset of ancient roads known from previous investigations is complemented by roads found on aerial images attained by drones and in archaeological field surveys conducted by our project. A Geographic Information System (GIS) is used to analyse these roads in relation to the ancient physical and human landscape, in order to answer such questions as to how space was used, organized and perceived, and how people in different periods were connected to their natural resources, their gods, other communities and the wider Mediterranean world.

Two case studies may be singled out, connected to the cultic and economic landscape, respectively:

1: Recent excavations on the top of the coastal hill of Plakari to the southwest of modern Karystos have revealed a sanctuary dating to the Early Iron Age to Classical period. On the nearby Karababa hill a second cut place  is located that on the basis of surface finds can be dated to the Archaic-Classical period.  The two sanctuaries are clearly linked though intervisibility, orientation and similarities in architecture and layout. It is hypothesized that there was a processional road connecting the two sanctuaries, as segments of an ancient road can be seen on the slopes of the Karababa hill leading towards the sanctuary close to the hil top. Finding and mapping new road segments using various remote-sensing techniques (drone imagary, satellite images, field surveys) help to reconstruct how these fragments connect. A next step in the analysis pertains to how this road system linked the two cult sites together, how it connected the cultic to the agricultural landscape, how it helped people to experience their territory, what different views on the landscape it offered, etc.

2: Close to the Roman cipollino marble quarries north of modern Karystos several, over ten meters long columns are lying in situ on the steep mountain slopes. They date to the Roman age period and apparently have been left there for further transportation. It remains a complete mystery how these large columns were to be transported to the coast. Remote sensing (drone imagery, satellite imagery, field surveys) in combination with Least-Cost Path (LCP) analysis in combination with may throw important new light on this aspect of the economic landscape. 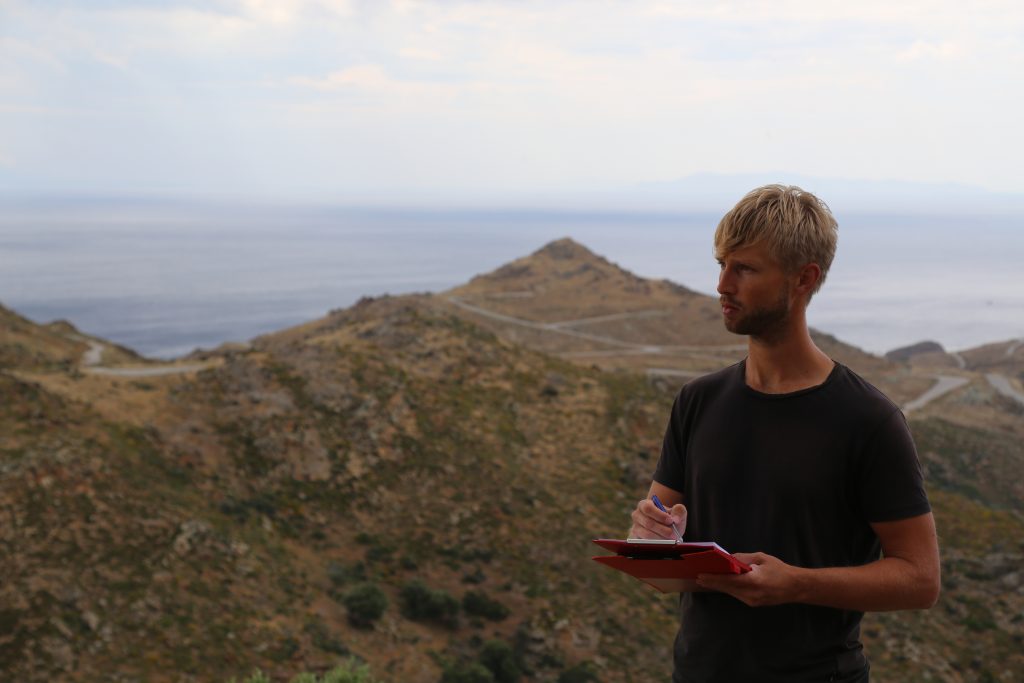